All wasps in the genus Eretmocerus are parasitoids of whiteflies. E. eremicus (native to North America) and E. mundus (native to southern Europe and the Mediterranean region) are the only two species sold commercially.

Adult Eretmocerus resemble Encarsia in size (approximately 0.5-0.6 mm long) but are entirely yellow (Figure 1). This wasp has a sex ratio of approximately 1:1 (male:female). This is different from Encarsia, where most individuals are female.

Parasitized whiteflies are a slightly different colour compared with unparasitized whiteflies. GWF pupae turn a distinct yellowish colour and Bemisia become brownish-yellow (Figure 2A, Figure 2B). The differences are not as dramatic as occurs when Encarsia parasitizes GWF but they are still quite obvious. 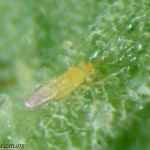 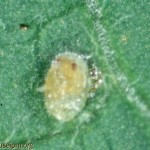 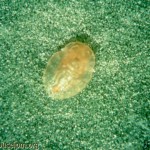 Adults live for 1-2 weeks and lay approximately 100-200 eggs during their lifetime. The majority of these eggs are laid within the first few days after emergence from their pupal cases (Figure 3.). These numbers however are quite variable and depend on a number of factors such as temperature, host whitefly (e.g. GWF or Bemisia) and host plant of the whitefly. See references1,2,3,4,5.

Although these wasp species will host feed on all 4 whitefly instars, they prefer to parasitize 2nd and 3rd instars1, laying their eggs underneath the larvae. The wasp larva then enters the whitefly after hatching. The effectiveness of this wasp is due to both parasitism and host feeding by the adult. Host feeding is necessary for egg development and an individual Eretmocerus female can kill up to 30 GWF nymphs/day in this way5. 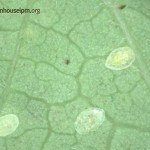 Eretmocerus are sold as a number of different products and in different packaging. They are sold on cardboard tags in a similar manner to Encarsia, with between 60-100 pupae per card (Figure 4); as loose pupae in sawdust or bran; or in an innovative packaging system called blister packs (small cardboard tags with a plastic chamber containing loose pupae and a perforated opening on the reverse side to allow wasp emergence). Eretmocerus eremicus is also sold as mixed product with Encarsia.

Refer to the Grower Guide: quality assurance of biocontrol products to determine the quality of the Eretmocerus at receipt at the greenhouse.

Distribution of Eretmocerus should follow the same general guidelines as for Encarsia.

Tags should be torn off the strips at the perforations, taking care not to touch the actual parasitized whitefly pupae that are on them. They are very easily damaged.

Eretmocerus on tags should be hung in the crop out of direct sunlight. In vegetables they should be 75 cm -1 m below the head of the plant. In ornamentals they should be in the canopy of the crop (Figure 5). They should be distributed evenly throughout the crop.

They are not strong fliers so the more release points in the crop, the better. For that reason, some producers offer tags with fewer number of Eretmocerus on them, so that the number of release points is greater.

Loose Eretmocerus should be sprinkled on the leaves of plants or placed in small emergence boxes that are placed within the crop (Figure 6).

Eretmocerus thrives at higher temperatures (as might be expected from their region of origin), and as such can be especially effective in summer conditions. However there are also studies that suggest that they can be more effective under winter conditions than Encarsia which is not a good predator during the cooler months6.

Introduction rate recommendations vary depending on the crop in which it is to be used. For E. eremicus, rates noted by the major biocontrol producers vary between 0.5-20 wasps/m2 depending on whitefly population levels, although 2-4/m2 is commonly recommended for preventative releases. For E. mundus, use only with Bemisia. Similar introduction rates are needed as for E. eremicus, but work closely with your biocontrol supplier. See External Links below for web sites of biocontrol producers.

As with Encarsia, monitoring of Eretmocerus activity involves close inspection of whitefly activity on the crop, looking for parasitized pupae. Eretmocerus adults are also often noticed actively searching on the underside of leaves. 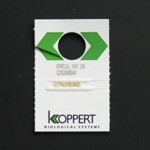 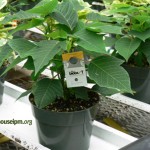 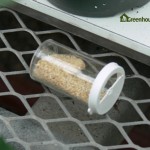 In ornamental crops, Eretmocerus are widely used in poinsettia where Bemisia is the predominant species and Encarsia is not as efficient. In Ontario, Canada, growers are divided in their use of E. eremicus vs E. mundus in this crop. Which BCA a grower uses is usually based on the recommendations of their biocontrol supplier. Both Eretmocerus species appear to be very effective, however, it is critical for cuttings to be clean at the start of the crop. Growers should introduce Eretmocerus as soon as cuttings are brought into the greenhouse, but monitor the plants closely for the presence of whitefly. If whitefly can be found easily in the first 2-3 weeks, then the biocontrol program may need to be reconsidered. In other crops such as gerbera where GWF predominates, E. eremicus is often used in combination with Encarsia or other BCAs such as Delphastus.

In Ontario, many vegetable growers start the season with Encarsia, then use a combination of Encarsia and Eretmocerus, followed by just Eretmocerus during the warmer months. The positive experience in tomatoes with Eretmocerus has resulted in some operations using this parasitoid exclusively.

4 Urbaneja A., Sanchez E. and Stansly P.A. 2007. Life history of Eretmocerus mundus a parasitoid of Bemisia tabaci, on tomato and sweet pepper. BioControl 52: 25-39

5Malais M.H and Ravensberg W.J. 2003. In Knowing and Recognizing: The biology of glasshouse pests and their natural enemies. Koppert BV, Berkel en Rodenrijs, The Netherlands and Reed Business Information, Doetinchem, The Netherlands.